All the unprotected rural lands of Galicia, apt for wind farms

It is now possible to place wind farms outside the Wind Development Areas (WDA) included in the Galician Wind Sector Plan. This Plan, initially approved in 1997 and amended in 2002, is becoming obsolete for a number of reasons. Above all, this is due to technological changes in the sector and a significant increase in the average power of wind turbines. Additionally, the boom in wind power over the last two years has modified the scale of wind development.

Finally, regulatory changes promoted by the parliamentary majority in the Galician Parliament have established specific changes every year without opening the elaboration of a new Sectorial Plan for the wind sector to social participation as demanded by a number of social groups.

Two modifications allow for the placement of winds farms outside WDA

The former of these two modifications, dating back to 2017, amended Transitional Provision 2 of Law 8/2009, which contemplated that wind farms should be located within Wind Development Areas (research areas and reserve areas, set by the PSEG), “…. as well as on the strip of land parallel to these areas.”

The other more recent modification was put forth through Law 9/2021 on the administrative simplification and support for the economic reactivation of Galicia. Among other changes, this new Law modifies Law 8/ 2009. It gives article 6.4 a new wording as follows: “Wind farms may not be implemented outside the areas included in the Galician Wind Sector Plan except for projects implementing substantial modifications in operating wind farms according to newly developed regulatory terms as well those that, given their economic and social entity, make a clear territorial impact essential to structuring the territory in accordance with the Xunta de Galicia as suggested by the Ministry responsible for energy.”

An example of a wind farm outside WDA

New requests outside WDA are yet to come given the short lapse of time from the last modification. However, a number of new requests outside WDA have arisen in the wake of the 2017 modification. Such is the case of the Coto do Carballal petition located in an area nearby but outside the Serra do Cando SCI in the Natura Network that currently has 2 wind farms, powering almost 65 MW and 97 wind turbines

This wind farm is listed in the Galician Wind Register under the “new request” category. Article 42 of Law 8/2009 states this register must include, among others, all wind farm procedures in process. It also states that such information is useful in managing overlaps between wind farms. Specifically, other developers are prevented from entering the spaces of wind farms already placed on the register. The importance and significance of this procedure is obvious. 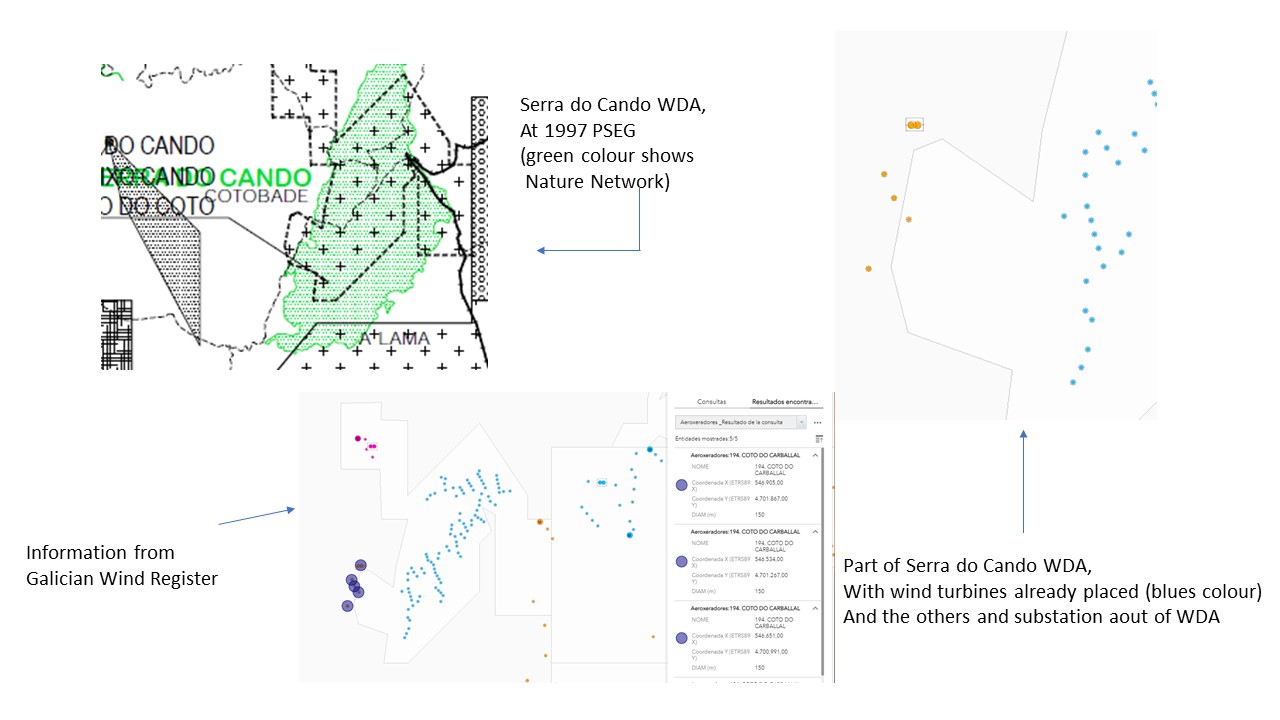 Regarding the 2021 law modification opening all Galician rural land without environmental protection to wind farms, the Xunta of Galicia should establish objective and socially accepted criterion to address the following questions:

Finally, we must consider that the wind territorial organization set forth by Xunta de Galicia, which establishes apt and non-apt areas for wind farm installation, is mandatory for all wind farm solicitations whether they be requested through the Xunta de Galicia itself or the Spanish Ministry. Within this context, it is also noteworthy to point out that the Xunta de Galicia is positioned against wind farms of over 50 MW processed through the Ministry that are located outside the WDA (when the Xunta’s own framework would allow for these wind farms). We can find references to this in several press releases: The mayor of Lalín, who appears in several press releases, affirms this and mentions an interview with the director of Energy Planning and Natural Resources of the Xunta concerning the Porcallos and Folgoso wind farms.