Social mobilization against macro wind farms in northwestern A Coruña

In recent weeks we have witnessed a continuous drip of new administrative procedures for wind farms. Along with those for which the Xunta de Galicia has exclusive competence in terms of their authorization (those with less than 50 MW), several wind farms have been presented to the Spanish government for authorization and environmental assessment. In a previous post on this website we already showed an estimate of the powers under process.

Today we would like to specifically refer to the 4 wind farms Iberdrola Renovables Galicia, SA intends to develop in several municipalities of A Coruña: Pedrabante, Pena do Corvo, Berdoias, and Alto dos Borrallos. This represents a total capacity of 292.5 MW, the placement of 65 wind turbines of 4.5 MW, with a height of 107.5 m, and a rotor diameter of 145 meters. The planned investment is 286 million euro. These wind farms would become the most productive of Galicia, reaching a power factor of 44% (as compared to the current 27% average) and their electricity production would represent almost 7% of the Galician electricity consumption (taken from the Energy Balance of Galicia 2019, Inega).
This Iberdrola initiative has generated social response for the following reasons.

It is a macro wind farm divided into 4 sub-parks

Affected individuals claim that the company is trying to commit a fraud by presenting a large wind farm split into 4 infrastructures that the company has submitted separately for administrative authorization. Environmental groups in A Coruña point out that with this tactic the company tries to avoid presenting the synergistic effects of an infrastructure of almost 300 MW, nearly 150 kilometers of High Voltage Line, and over 500 support points for this HVL.

It can be deduced from the analysis of the documents of each wind farm carried out by the GWO that the 4 parks share two newly constructed basic infrastructures without which none of the wind farms would operate: the Mesón do Vento Collector Substation and the HVL itself that connects this Collector Substation and the existing Mesón do Vento Substation, owned by Red Eléctrica Española. No wind farm could function without such shared infrastructure. As can be seen in the attached figure, the Berdoias wind farm could not exist without the Pedrabante wind farm and the Pena do Corvo wind farm would not exist without the Alto dos Borrallos wind farm.

Attempt to place wind turbines outside the Wind Development Areas

As can also be seen in the attached figure, all the wind turbines of the PE Pena do Corvo, Berdoias and Pedrabante, and a substantial part of those corresponding to Alto dos Borrallos, are located outside the Wind Development Areas. Several voices have been raised against this option given the current legal framework. Among them, the most important is that of the Xunta de Galicia itself which, through the issuance of several mandatory (but not binding) reports has stated that “… for all the above, the wind farm project promoted by IBERDROLA RENOVABLES GALICIA SA is reported as unfavorable since all its positions and the polygon do not comply with the provisions established in the Galician Sectoral Wind Plan”.

However, this has not prevented the Spanish government from continuing with the proceedings for these wind farms. The Galician Wind Observatory defends that the Xunta is involved in the processes of public exposure to reiterate its unfavorable report. We also appeal to the exclusive power of the Xunta de Galicia regarding land use planning, which is contrary to legislation attempting to establish wind farms outside the areas assigned by the current sectoral plan. This statement is even valid after the amendment of Law 8/2009 of the Galician wind sector by which the regional government had opened the possibility of placing wind turbines in any rural area with no specific protection, as presented in this same web.

This wind farm would also pose a serious risk to environmental and cultural assets, say different voices who have studied the projects on public display in depth. For the case of environmental effects, the Pena do Corvo wind farm is a magnificent yet terrible example according to the Monfero di Non Platform writings. Indeed, the polygon of this wind farm is within the area of the Natural Park of Fragas do Eume, included in Natura 2000 Network. Also, various of its wind turbines are located within the buffer zone of the natural park itself. According to several sources within the Municipality of Monfero, no volume of electricity production can justify the risk posed to its conservation.

As far as cultural assets and their effects are concerned, numerous examples have been made public. We think that the most outstanding is the concentration of potential impacts on the English Way of St. James where the HVL of the Pedra do Corvo and Alto dos Borrallos wind farm come together at the new collecting substation to give entrance from that point to the existing substation Meson do Vento. As can be seen in the figure attached to this news, the Castro de las Travesas is at the foot of the REE substation and even though part of this is underground, the effects on the English Way remain evident. 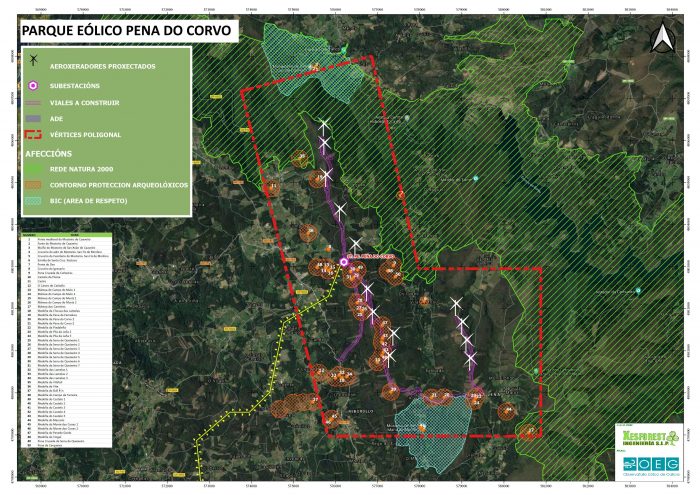 The impact of the Pena do Corvo wind farm on the Monfero Monastery, an important Asset of Cultural Interest, is also significant.

Everything seems to indicate that this macro wind farm is outside the current legal framework. The social mobilizations and the hundreds of allegations presented are under analysis by the Administration. As in all former cases, including the 4,000 MW already authorized by the Xunta de Galicia, rural communities are mere spectators who have no teams of advisers nor the necessary resources to respond to such a huge volume of documentation in a such a brief period of time. In addition, all the wind farms processed by the two administrations are not accompanied by industrial plans for the Galician regions to allow for the creation of a technologically-based business fabric to put this country on the path of environmental sustainability. By contrary, we are witnessing a race to raise European funds, non-refundable grants caused by the terrible misfortune of the yet present covid-19 pandemic. Would another model not be possible?